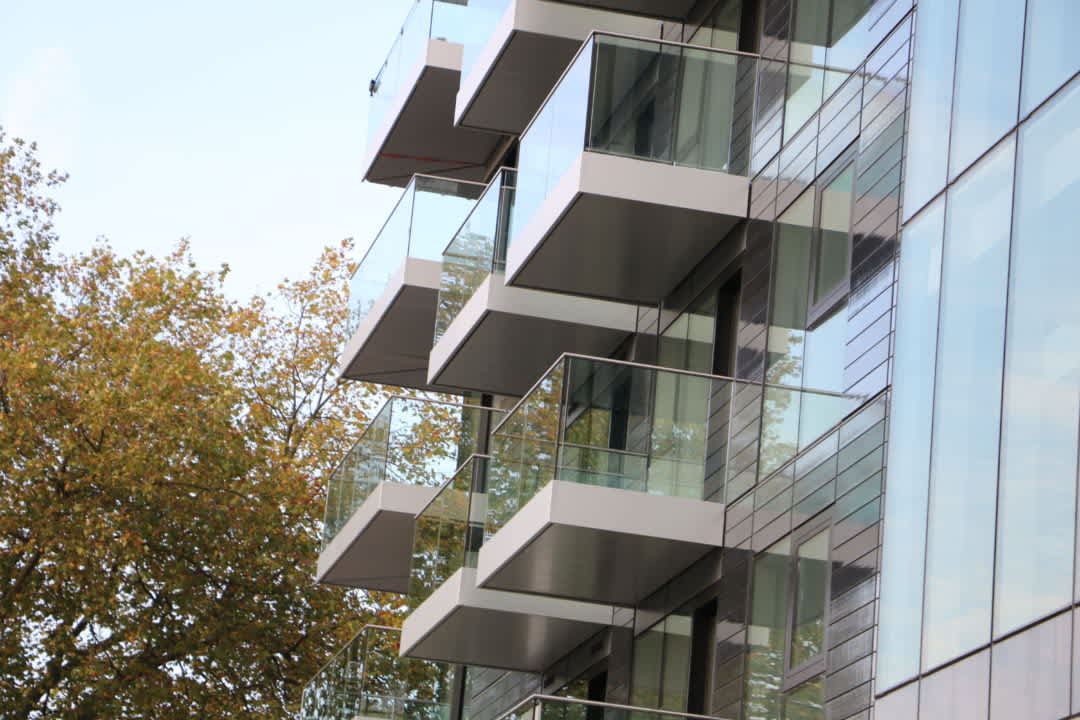 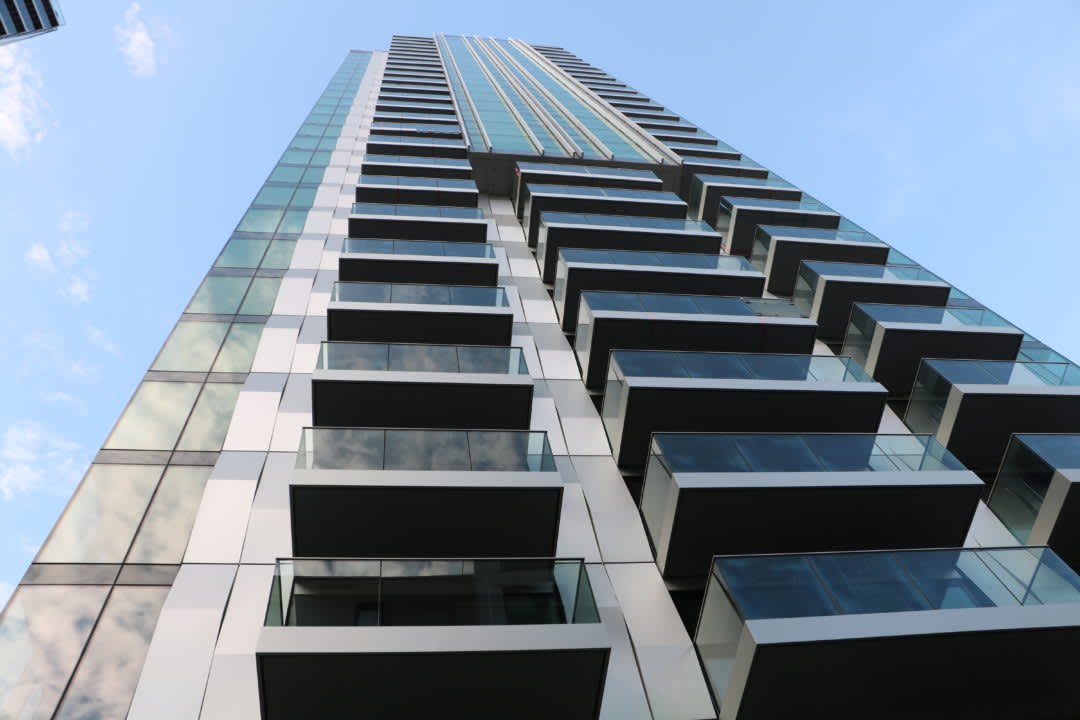 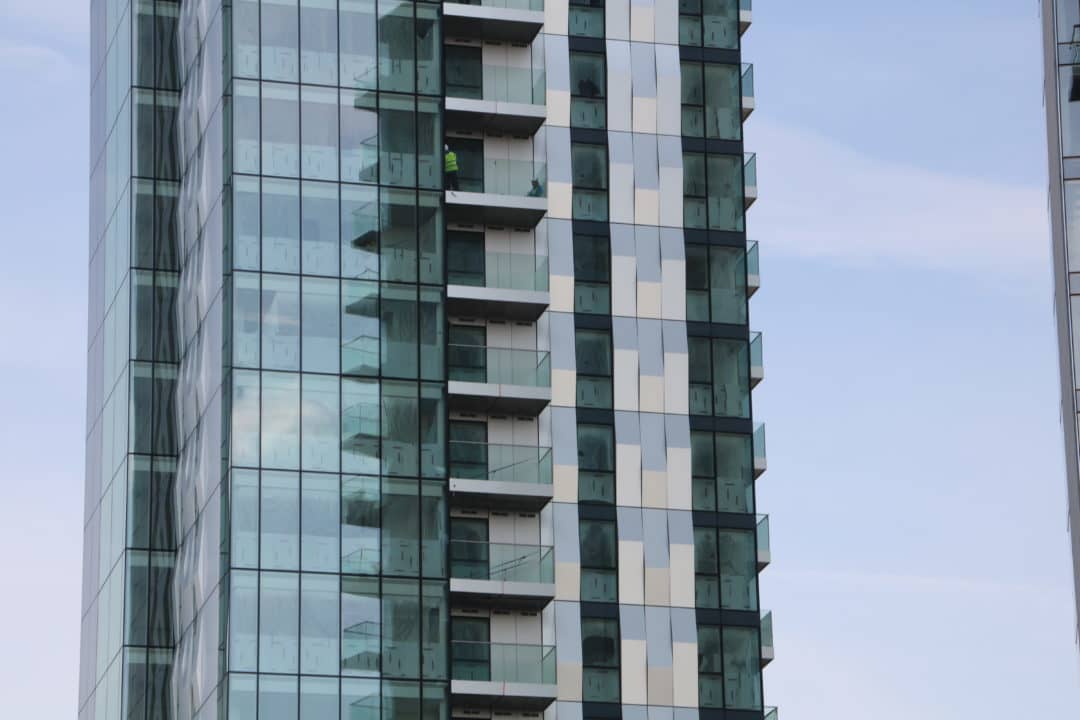 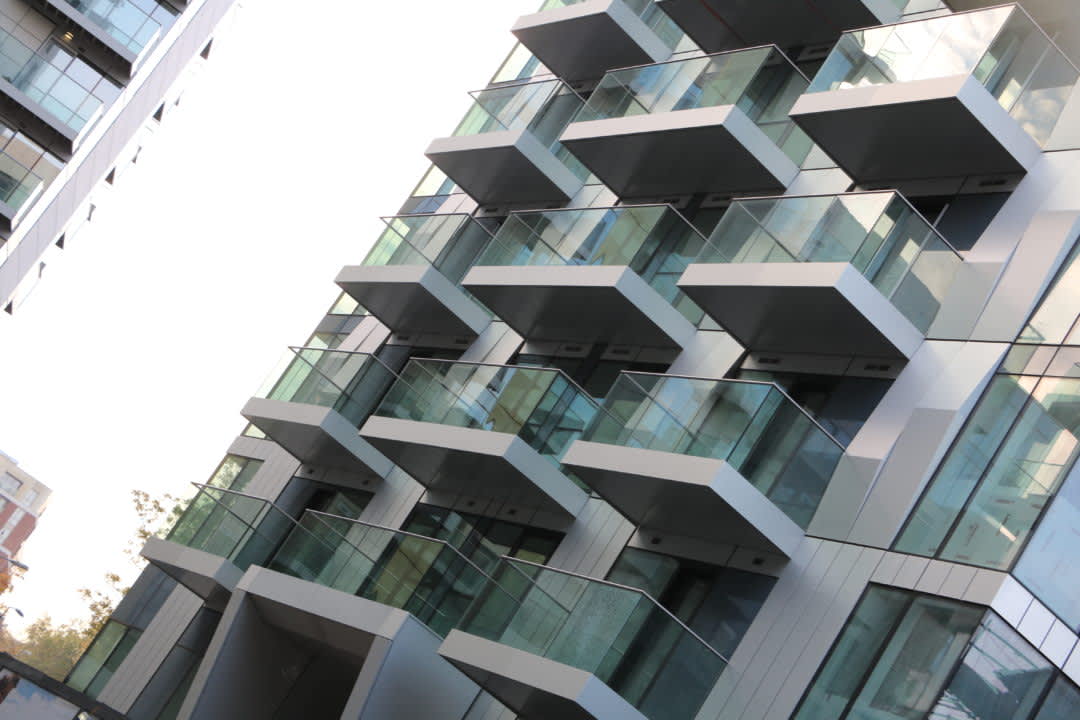 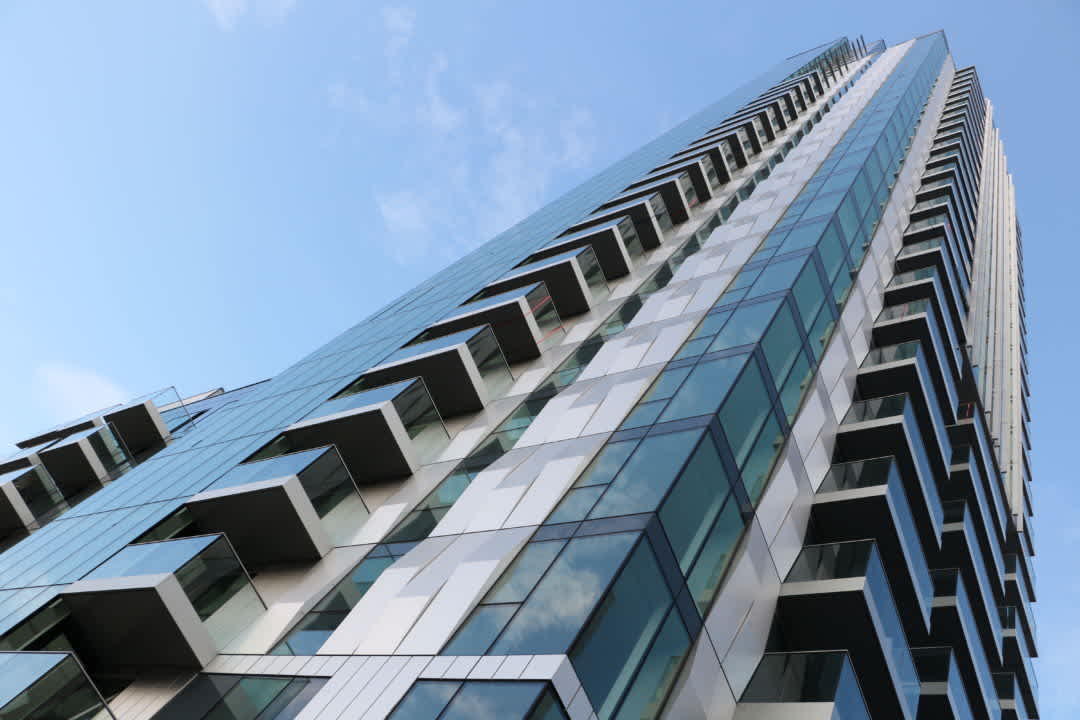 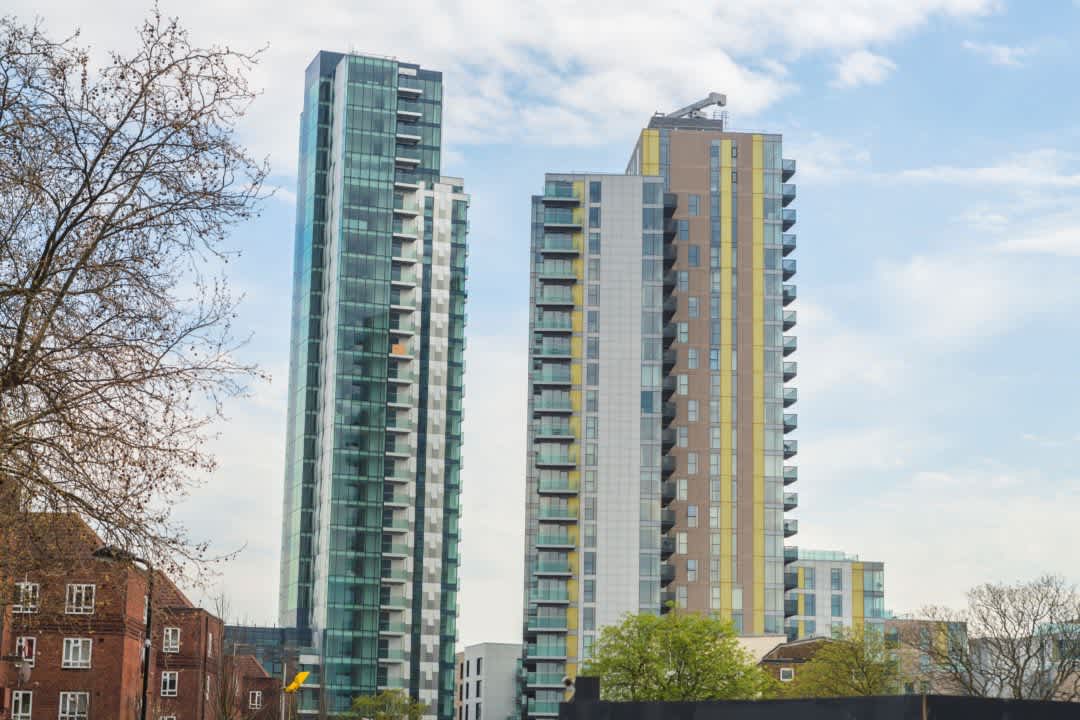 We took control of the Woodberry Down Tower project after a competitor had ceased trading. Over 150 Glide-On™ balconies were manufactured and installed for Skyline, the development’s 30-storey residential tower. Due to a goods hoist which was still erected, 30 balconies could not be installed until it had been taken down. By this point the tower crane had also been removed, adding further complication.

Once all phases are completed Woodberry Down will deliver around 5,500 new homes, situated alongside reservoirs and open spaces and yet just a short distance from Central London and the City.

The competitor had intended to install bolt-on balconies, but after they ceased trading we redeveloped the standard arm design so that the Glide-On™ balconies would still work. As a result, we could then use the competitor’s connections while using the Glide-On™ Cassette® arms. To install the final 30 balconies, we created an innovative roof hoist to enable installation after the crane had gone. Once finished, the hoist could be dismantled and taken down in the internal goods lift.

Balconies for the Woodberry Down Tower were manufactured offsite in one of Sapphire’s production facility while connections were being completed. With the building prepared the prefinished balcony units, complete with glass balustrades and soffits, were transported to site ready for fixing to the façade using the system’s innovative connectors. Sapphire’s fast-track solution saved the housebuilder time, labour and crane hire charges.

Once again, Sapphire’s Glide-On™ system has allowed record-breaking balcony installation speeds. As soon as the installation team got up and running, they were able to unload and install balconies very rapidly.

Step 1: Balconies were manufactured offsite in our production facility then stored allowing time for connections to be completed.

Step 2: The pre-assembled balconies complete with glass balustrade and fully finished Cassette®, were transported to site on flatbed lorry trailers.

Step 3: The majority of the balconies were installed using the crane until it was taken offsite. This included two-part corner balconies to the mid-rise parts of the development.

Step 4: The final 30 balconies were installed using our specially developed roof hoist to avoid conflict with the goods hoist.

Design this Balcony for Your Project

Using COACH you can design the balcony for your project & download technical details... 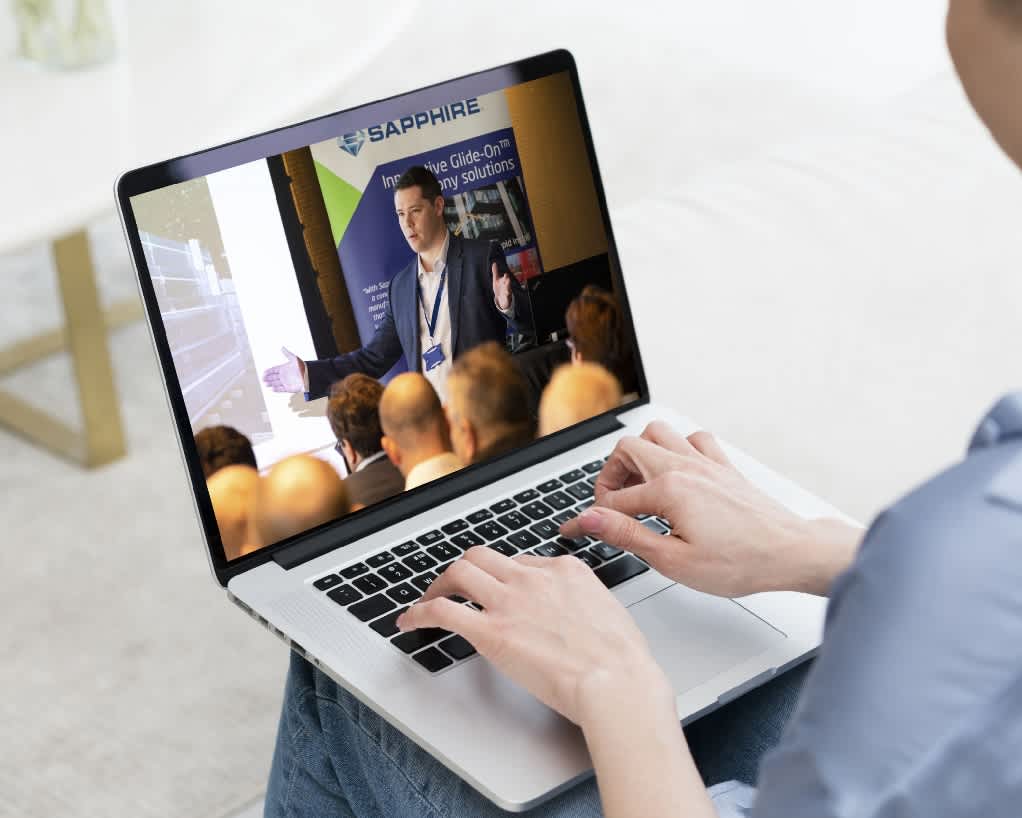 Find out about Resibuild events

Hayes Village is a vast redevelopment on the site of the old Nestle factory, featuring Art Deco architectural features and unique balcony designs. Designed by Makower Architects and delivered by Barratt Homes, Hayes Village remains true to the history of the area by preserving key features of the Nestle Factory, from the original façade to […]

The Madison, Eastlands E01/02, is one phase of a substantial development of Wembley Park surrounding Wembley Stadium. Wembley Park is an 85-acre development by Quintain comprising of an astounding 8,400 new homes, a 7-acre park and extensive office and retail space totalling 8.8 million sq ft. Wembley Park is set to be an exceptional place […]

This website uses cookies so that we can provide you with the best user experience possible. Cookie information is stored in your browser and performs functions such as recognising you when you return to our website and helping our team to understand which sections of the website you find most interesting and useful.

If you disable this cookie, we will not be able to save your preferences. This means that every time you visit this website you will need to enable or disable cookies again.